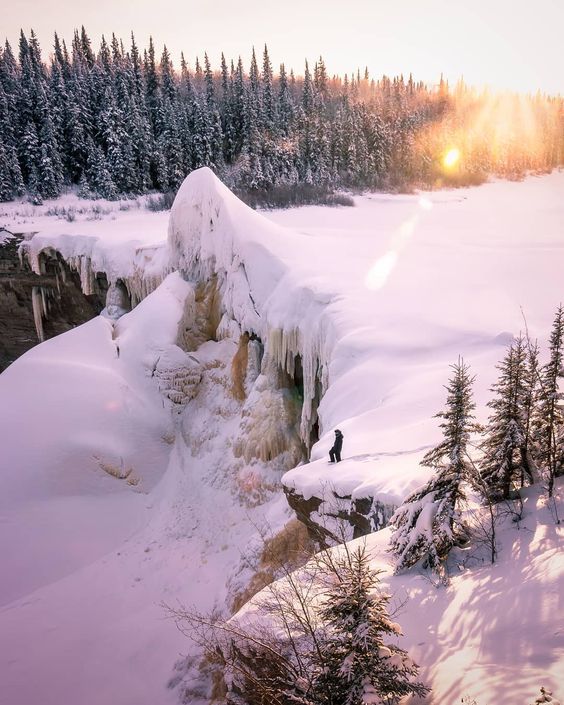 Here the temperature remains at freezing -40 degrees Celsius almost all year around!

Unless it is summer where temperature hardly reaches 25 degrees Celsius!

During winter the sun does not rise making it land of the midnight sun as it is dark round the Clock!

In summers it is hardly dark as sun shines round the clock!

Can you image which part of the planet it is?

This is North West Territories, the largest Union Territory of Canada that spreads more than 1.3 Million Kilometer square.

There is a tree line cutting right across this Union Territory constituting one of the most striking wilderness in the world and you will love it if are adventure lover.

Nahanni National Park Reserve-This remote reserve is one of the treasures of northern Canada. Nahanni is also a beautiful lake flowing through stunning Canyon scenery of Mackenzie Mountains that may challenge you if you are a Canoeist. The South Nahanni River tumbles over Virginia Falls creating most impressive waterfalls in Canada.

Wood Buffalo National Park- This Park is one of the biggest parks in Canada. The park was created to protect endangered herds of wild buffaloes inhabiting this area.

Yellowknife- This is the capital of North West Territories that grew up in 1930 gold rush. The old habitation has been replaced making it a mix culture of wooden heritage buildings, arts and cultural institutions.

Great Bear Lake- This 240×400 Kilometer river remains frozen for almost 8 months and its shores are very rich in wildlife. You will find Grizzly bears in summer roaming around and pinewoods in the winters. It is especially famous for some of the world’ heaviest Trouts (a special kind of freshwater fish).

Ice Roads- if you have seen “Ice Road Truckers” in History channel, you will definitely know this. The shooting was done in North West Territories which is home of world’s largest ice road. These ice roads are built on top of packed snow and 3 feet of ice that adds 870 miles to the ice road connecting them to mines and remote communities.

Great Slave Lake- This is 600 meters deep making it the 6th largest lake in the continent of North America. It is frozen for about 8-9 months where you can see dog sledders racing on the frozen land but you will see lots of action in summers that include house boats, sailors, and anglers.

Dempster Highway- if you love to drive this 737 Kilometer long highway is the best place that passes through the rugged mountain peaks of the Tombstone Range, across the Arctic Circle and into Mackenzie River Delta before entering Inuvik. You can camp, fish, canoe and enjoy remote wilderness along this highway.

Inuvik-It is a modern settlement in the Arctic Circle and on the Mackenzie River built between 1955 & 1961. It replaced Aklavik as it was flood prone. Today Inuvik is the trading, administrative and supply centre for the Western Arctic and includes hospitals, schools and an Artfield. Tuktut Nogait National Park lying on east side of Inuvik was established in 1996 and boasts of some truly overwhelming arctic rock scenery with amazing canyons & Cliffs.

Northwest Passage- This is a link between Pacific Ocean, Arctic Ocean & Atlantic Ocean due to waterway access and became important after oil discovery. It is a historic place as it has evolved due to exploration and discovery by many people.